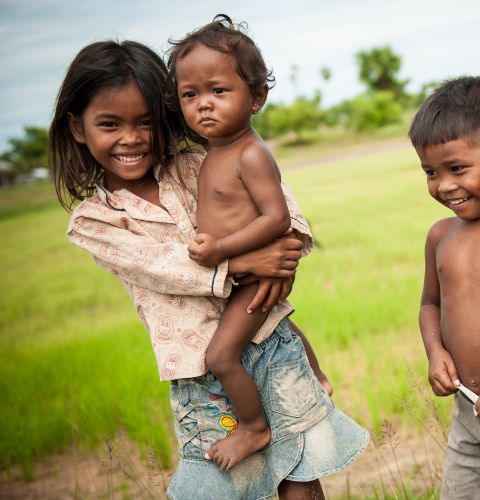 ActionAid began operating in Cambodia in 1999. We work to support some of the most vulnerable communities in Cambodia to claim their rights through education, training and loans. Find out more about Cambodia, including facts, statistics and information about ActionAid's life-changing work.

As of April 2021, ActionAid has supported more than 50,000 people as part of our emergency coronavirus response in Cambodia. The pandemic has increased pressure on the poorest people in Cambodia, particularly women and girls and small-scale farmers, for whom food scarcity has worsened.

We’ve distributed food assistance packs among more than 2,000 people, as well as Covid-19 prevention leaflets and hygiene supplies like soap, sanitiser and facemasks for more than 20,000 people.

Our outreach work is being led by Women Champions: local women who know best the needs of their community.

Why we work in Cambodia

In 1975 the nation was torn apart by civil war and the Khmer Rouge regime, which claimed the lives of up to two million people.

The Khmer Rouge regime ended in 1979, and Cambodia has since experienced relative stability.1 Today, the country's rich culture attracts more than a million visitors every year. However, around 35% of Cambodians still live in poverty.2

Women and girls experience many challenges in Cambodia. There is an unequal power balance between men and women culturally, and violence against women and girls is common: 30% of Cambodian women who have ever had a partner have experienced some form of violence from their intimate partner in their lifetime.3

Cambodia also has low literacy rates, and a large disparity of literacy between men and women: 85.1% of men are literate, compared to just 70.9% of women. In Ratanakiri, home to a large number of indigenous people, the adult literacy rate is just 45.9%.5

The country is also vulnerable to floods, droughts and insect infestations. These affect crops, destroy homes and force villagers to move to safer ground. As the majority of Cambodians depend upon their crops for food, when disasters hit they struggle to feed their families. 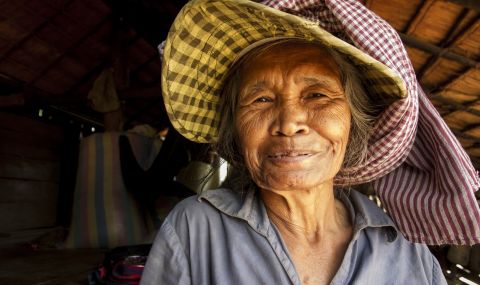 Yei Tha, 70 is a farmer from Battambang province. Thanks to an agricultural training run by ActionAid and our local partner, she now earns enough to send her grandchildren to school. Photo: Savann Oeurm/ActionAid

What we do in Cambodia

We support rural women to establish community savings groups. Members can borrow and repay money, interest free and get help to start small businesses. This helps women afford to send their children to school. Our Safe Cities Programme is targeting the local and national authorities to ensure they improve the safety of women and girls vulnerable to violence in cities.

To help day labourers who cannot earn money for food when the floods arrive, we provide rice loans. And to help farmers boost food production we provide training on crop diversification and new techniques. Farmers who receive training share their knowledge with the rest of the community.

ActionAid runs regular workshops for parents on the importance of children going to school and we work with teachers and parent groups to improve the quality of education. We also identify the children most likely to drop out due to poverty and provide a school uniform and bag, notebooks, pens and pencils so they can continue their lessons.

Farming techniques to feed the family

Mrs. Lers Houn, 31, struggled to raise her two daughters on her indigenous farming knowledge. Her vegetable harvests were low and she could not feed her family all year round.

ActionAid and local partners identified the most vulnerable smallholder farmers, especially women, and trained them to modernise their production techniques. Now Mrs. Lers Houn can feed the family without worry and put the money from selling surplus crops towards her children’s education.

I could harvest 15-20 kg of many types of vegetable per week, up from 10-15 kg per week compared to the past year when I grew without proper techniques. The new farming techniques really work."

Read more about our work on ending hunger

Working together to send children to school

Choun Sokhun is 42-year-old farmer in Cambodia’s Battambang province. She joined an ActionAid training on agriculture and through our local partner received guidance on how to advocate for better quality education in her area.

Choun Sokhun told us: "Things have been changed in my community since ActionAid has worked in my village. The revolving fund and the agriculture training support me and other women in the village to increase our incomes - particularly, so that we have enough money and food to send our children to school."

"Now, my children can go to school and their learning is improved day by day," she says. "And our proposed request for state teachers and a new school building was sent through the village authorities."

Donate to support our work on education

Choun Sokhun was supported by ActionAid in Cambodia, and now can afford to send her children to school

Top image: Children from a community supported by ActionAid in the province of Pursat, Cambodia. Alberto Marotta/ActionAid