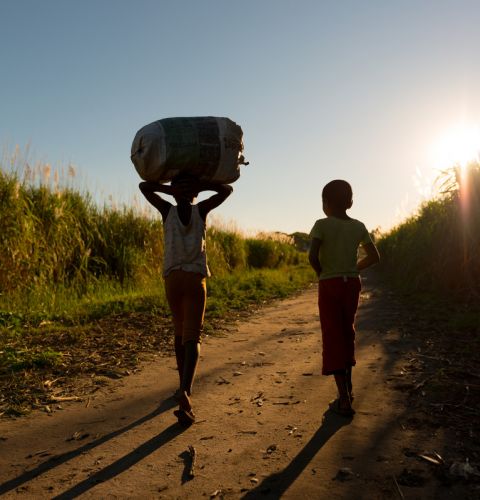 ActionAid has worked in Mozambique since 1987. Find out facts and information about the country, the problems it faces and the work ActionAid does to support communities affected by drought, hunger and violence against women and girls.

Since the onset of the coronavirus pandemic ActionAid has reached more than 20,000 people in Mozambique with emergency aid - but we urgently need to do more to support vulnerable communities.

Our response has included distributing food packages, menstrual products, mosquito nets and other essentials to people in need, as well awareness-raising activities to inform people how to prevent the spread of Covid-19.

Amid the heightened risk of gender-based violence, we’re also working with a team of community activists and implementing a referral system to protect women against violence and report any cases.

Please help us reach more people by donating to our emergency appeal today.

Why we work in Mozambique

ActionAid began work in Mozambique in 1987, initially providing emergency relief to people fleeing the civil war which lasted for 16 years and left millions dead or displaced.

Today our key areas of work include education, women’s rights and ending hunger.

Despite being one of the world’s fastest emerging economies, more than half of Mozambique’s population live below the poverty line. Although the country’s rich natural resources have attracted recent foreign investment, the benefits have failed to reach the majority of people.

Flooding, drought and erratic rainfall in Mozambique make farming a challenge for families already living below the poverty line. Most women do not own the land they farm, despite the fact that 90% of farmers here are women.

Although Mozambique has achieved over 90% enrolment in primary education, (compared to just 56% in 1995), drop-out rates are still high, and it is mostly girls who are missing out on a full education.

Nearly half of women are illiterate, and many are unaware of their rights to basic services such as healthcare. 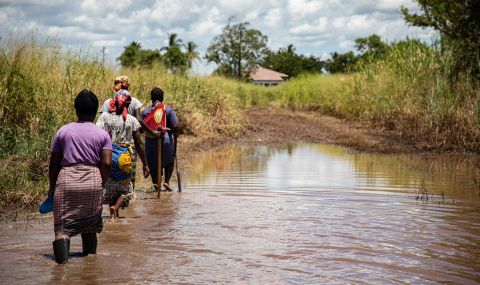 What we do in Mozambique

Through our work supporting farming associations, ActionAid helps thousands of women to access and control the land they work on, and increase the amount of food they produce.

We train women in sustainable farming methods, enabling them to plant diverse and resilient crops that will grow throughout the year and boost their income.

We also support families who have been affected by floods by providing emergency food supplies, shelter, and seeds to replant crops.

ActionAid works with women’s groups, police officers, teachers and students to raise awareness of the dangers of harmful traditional practices, and to reinforce the protection of women and girls in their everyday lives – at home, in school, at work on public transport and in market places.

We support thousands of women and girls, offering workshops on how to identify and report incidences of violence and to follow-up with local courts and tribunals.

To improve education opportunities for women, we support groups where they can learn to read and write. These groups also play a fundamental role in raising adults’ awareness of the barriers to children getting an education, and come up with ways in which children – particularly girls - could be encouraged to return to school.

We also train and support school councils which bring together children, parents, teachers and the wider community to tackle issues like drop-out rates and making schools safe for girls.

Mozambique is currently facing a severe food crisis, related to two devastating cyclones which struck in 2019, and the worst drought the region has faced in 35 years.

ActionAid is scaling up to respond to the food crisis in Mozambique and neighbouring countries. We’re distributing life-saving items like food and water purification tablets, plus critical items for longer term health, such as safe sanitary products and hygiene kits.

Learn more about this crisis and how you can help

In March 2019 we responded to Cyclone Idai, a devastating cyclone that affected Mozambique, Malawi and Zimbabwe.

Possibly the worst weather-related disaster to ever hit the southern hemisphere, the cyclone killed at least 1,000 people and left 400,000 without a home.

Mozambique was the worst-affected country in the region - 1.5 million people were affected.

In the long-term, our work includes helping communities to rebuild their livelihoods, by training women in farming and distributing agricultural tools.

Find out more about Cyclone Idai in Mozambique

Drought, flooding, insecurity and the impacts of an unprecedented two cyclones, Kenneth and Idai, have left 2.5 million people in urgent need of humanitarian support in Mozambique.

Fatima, a farmer from Lamego, Mozambique lost everything when fatal flooding destroyed her crops.

Every year we rely on the field, but everything is gone."

In Manhica district, school councils are making a big difference to education.

58% of people in the district are illegitimate - predominantly women.

But with support from ActionAid, parents and teachers, the Primary School council has managed to build a kitchen where school means are cooked, helping more girls go to school, like Rosa, a local school pupil. She said:

I can now say proudly to anybody where I study because we now have a true and genuine school.”

We have also supported the building of new classrooms and toilet blocks.

Learn more about our work on education