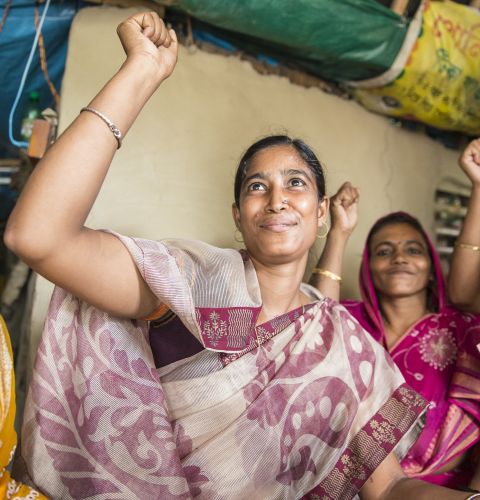 ActionAid has been working with poor and marginalised women, girls and communities in India since 1972. We work in 24 states across the country.

India is the largest democracy in the world, with a population of nearly 1.3 billion. Despite its status as of the world’s fastest-growing economies, people living in both cities and rural areas experience extreme poverty.

Learn more facts and figures about India, and read about ActionAid's work supporting women and girls.

A sharp rise in Covid-19 case numbers has caused a lethal, second wave of the crisis in India.

Covid-19 cases in India in 2021 are rising faster than the first wave in 2020, as the newer variants of the virus such as B1617 are a lot more transmissible.

India has seen a record number of new cases recently, around 349,691 bringing its total to more than 16.9 million. It has also reported another 2,767 deaths in the last few days pushing India’s fatalities to 192,311.1

Hospitals in India are overwhelmed with oxygen shortages and insufficient numbers of hospital beds. There are now calls for more beds, oxygen, essential drugs, and tests.

In 2020, ActionAid India successfully raised substantial funds to respond to the first wave of coronavirus, reaching more than seven million people. With the economy already severely weakened after the first wave, and months of lockdown, domestic resources are now scarce.

In response to the escalated crisis, AA India is planning:

We urgently need your help to support the most vulnerable to stop the spread and save lives.

If you donate now, 90% of your donation will go directly to our emergency Coronavirus response. Funds are currently being prioritised to India and Nepal where the need is urgent. Please give what you can now.

Why we work in India

Discrimination against women is widespread in India. Women living in the poorest areas have almost no access to finances, land and inheritance rights. Domestic violence, rape, harassment, acid attacks and ‘honour killings’ are frequently reported.

Women in India face extremely high levels of sexual violence. Shockingly, one rape is reported every 15 minutes on average, and countless more are committed.

This violence is closer to home than many might think; in 95% of reported rapes, the survivors knew their rapist.

Despite the large number of cases of sexual violence in India, there are relatively low conviction rates for perpetrators. Legal loopholes and poor implementation of the law mean that many survivors are unable to successfully prosecute their abusers and get access to justice.

Many women do not report these crimes at all, from fear of social stigma and the high cost of legal fees.

Training women to provide for themselves

When Talat, from India, got married aged 17, her husband’s family began abusing her. They would demand money from her and prevent her from leaving the house on her own – not even to see own mother.

After five months of abuse, Talat’s mother helped her daughter leave her husband’s house and got in touch with staff at the Gauravi One-Stop Crisis Centre, which had recently opened. Talat enrolled on a rehabilitation programme for women who had been affected by abuse.

As part of the programme, Talat was given an option to learn to make poppadums or train as an autorickshaw driver. “When this opportunity came to me to learn how to drive, I chose it because I wanted to learn something different and be a woman auto driver,” she says.

Talat lacked confidence when she first went behind the wheel, but now feels happy on the road. In the future, she hopes to transport women and girls to and from the centre, as well as teach other women to drive.

Talat, a domestic violence survivor, is one of the rickshaw drivers helping in distributing food and vital aid.

What we do in India

Ending violence against women and girls

In India, we run One-Stop Crisis Centres where survivors of violence can get access to immediate and comprehensive support, a safe place to sleep and emotional, medical and legal help all under one roof.

When ActionAid's Gauravi One-Stop Crisis Centre in Madhya Pradesh (the state with the highest reported rate of violence against women and girls in India) opened in 2014, it was the first of its kind in the country.

Since the centre was established, it has supported 39,777 women and girls. An estimated 90% experienced violence from someone that they knew.

As well as supporting survivors, our local outreach workers are changing attitudes and challenging stigmas to end violence against women and girls. They are empowering women to recognise different types of violence within the home, and know where to get support.

ActionAid is also working with communities and law enforcers to them help spot the signs of abuse, report violence and ensure that perpetrators are prosecuted.

Across India, ethnic minority and caste groups experience discrimination, abuse and violence. Known as India’s ‘hidden apartheid,’ one in six people are affected by ethnic or caste discrimination.4 This includes not allowing people from lower castes to go to school, own land or have certain jobs.

In the state of Karnataka, ActionAid is supporting the Koraga tribe to stand up for their rights. Traditionally, Koraga tribespeople are restricted to the profession of basket weaving – meaning that many live in extreme poverty.

Together with the Koraga community, ActionAid has fought to reclaim land stolen by high caste neighbours, opened the discussion on women’s rights in the community and set up centres where children can play and learn.

Witnessing discrimination against their classmates, students also organised a federation to protect Koragas children at school.

India is home to roughly a quarter of the world’s undernourished population5 and more than one-quarter of school-age children are too thin.6

ActionAid’s cooperative scheme is providing a lifeline to women living in some of the poorest parts of India, where food is scarce.

With a small grant and business training from local staff, women choose a livelihood and re-invest the profits back into the cooperative for everyone to share, so that they can feed their families.

According to estimates by experts, there are 63 million missing women in India7 because girl babies are being aborted before they are born. India’s annual economic report found that there were only 39 girls born per 100 births between 2015 and 2016.8

Because girls are seen as a burden to their families due to the tradition of giving a daughter’s dowry, many mothers are forced into taking an illegal sex determination test. If the foetus is female, they can be pushed into having an abortion.

In 2014, a Beti Zindabad campaign on Mumbai’s local trains reached millions of commuters with messages including: “If we don’t wake up now, it might be too late”.

Mylapalli is a member of a fishing cooperative, made up of 40 women and supported by ActionAid in Andhra Pradesh, south-eastern India.

“My husband is a fisherman and I sell dried fish,” she says. “The cooperative has made life better for my family. We learn so many useful things in the training sessions, for example how much salt to put on the fish, where to dry them and when to dry. This helps us to enhance the quality of the fish, so we get more money.”

Read more about our work on sustainable livelihoods

Mylapalli (right) dries fish with her daughter Rajeshwari, 11, after school.

Jyoty, 26, celebrates the birth of her daughter, Tanya.

Celebrating the birth of baby girls

After a boy is born, it is traditional for an Indian family to throw parties, bang drums and give out sweets.

ActionAid India's campaign to celebrate daughters is centred around celebrating the birth of baby girls in the same way, to show that they are just as important and valued as boys.

“Many mothers say how we [made an effort to] congratulate them and say a few kind words on the birth of a daughter,” says Smita Khanijow, from ActionAid India. “These gestures go a long way for them as they get acceptance within their families and society.”

Sabita, 28, belongs to the Koraga tribe. Orphaned as a child, Sabita was forced to drop out of school twice because her uncle couldn’t afford the fees.

“But I always loved studying. The condition of the people in my community prompted to me study further,” she says.

Today, Sabita is an assistant professor of sociology at Mangalore University. Infuriated by the humiliating and discriminatory practices Koraga people face, Sabita lobbied for change. Now her people are treated with more respect in their community.

Sabita is a role model to aspiring students – she’s the first person from her tribe to become a professor.

Sabita Gundmi is now an assistant professor at Mangalore University.