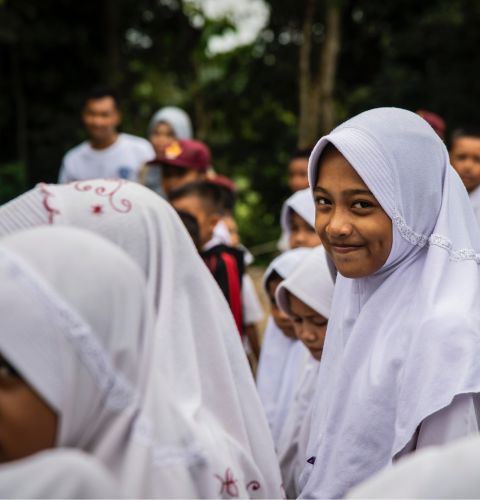 ActionAid has been working in Indonesia since 2016, when our local partner organisation, YAPPIKA became a member of the ActionAid federation. We are now known as YAPPIKA-ActionAid.

YAPPIKA has 30 years of experience providing support to communities in Indonesia.

Based in various regions of Indonesia, we support local partners to empower women and girls, advocate for safe and well-built schools for children, and provide humanitarian assistance during emergencies.

The Indonesian government is concerned that Indonesia could experience an economic recession if the Covid-19 pandemic continues unabated.

The Indonesian Chamber of Commerce and Industry (KADIN) said that currently there are 6 million workers who have lost their jobs. The Covid-19 pandemic has affected the livelihoods and income of Indonesian families and could place millions of children at risk of poverty.1

ActionAid is conducting needs assessments of vulnerable families and rolling out Covid-19 prevention measures including protective wear and hygiene kit distribution for communities.

We urgently need your help to support the most vulnerable to stop the spread and save lives.

Why we work in Indonesia

Inequalities around women’s rights, risks to children attending school, and disasters like tsunamis are some of the issues facing communities in Indonesia.

Nearly 5 million primary school children are studying in dilapidated schools2 . One out of six classrooms in these schools is in some form of disrepair forcing children to study in unsafe environments. This can include crumbling building foundations, missing floorboards, and leaking roofs.

Discrimination and inequality between the sexes mean that women and girls struggle to make their voices heard and face challenges taking part in civil society.

The Covid-19 pandemic has exposed further gender inequalities in Indonesia. Rates of domestic violence against women increased during country-wide lockdowns and two long-awaited pieces of legislation - a sexual violence prevention bill and a domestic worker protection bill - have been put on the hold during the pandemic.3

Indonesia has also faced a series of earthquakes and tsunamis.  One of the more destructive disasters of recent history, the 2004 Indian Ocean earthquake and tsunami that hit several Asian countries including Indonesia resulted in a death toll of over 100,000 people in the country.

Most recently,  an earthquake of 7.4 magnitude struck the central province of Sulawesi in Indonesia killing many and killing over 4,000 people and leaving hundreds of thousands of survivors without food, water, and shelter.

Indonesia is also part of the Pacific Ring of Fire, with 130 active volcanoes and a high likelihood of volcanic eruptions. Indonesia has suffered severe eruptions in the past resulting in fatalities and damage to the environment.

What we do in Indonesia

Supporting the building of safe schools

Our safe schools programme in Indonesia ensures schools are built to code and that they provide a secure and stable environment for students.

ActionAid-YAPPIKA supports local communities to lobby their local governments to allocate a budget for school repairs. We also train schools and their neighbouring communities to improve their technical knowledge, so that they can play an informed and active role in the renovation of their schools.

In recent years, 27 schools have been repaired with funds and support from the government along with donations. ActionAid plans to renovate over 1,300 classrooms and to empower 82 other school communities so that 17,000 primary school children can attend school safely.

The Covid-19 pandemic has exacerbated already existing gender inequality in Indonesia. Unpaid care work and domestic violence cases against women have increased and access to health, education, and support have been hampered4 .

We work with women's groups and other civil society organisations to raise awareness about gender inequality in 50 districts.

We train women in leadership skills and strengthen their ability to influence public policy. We also help strengthen local networks so they can share knowledge, and campaign for access and better services for women.

Responding to and building resilience to disasters

Our local staff provided immediate humanitarian relief during the Indonesian earthquake and tsunami of 2018.

In the immediate aftermath of the disaster, we reached out to 60,000 people with emergency aid including tents, tarpaulins, blankets to shelter families who lost their homes, and essentials like food, water, clothing, and nappies.

We set up public, community kitchens in the worst-hit areas to provide hot food for thousands of people a day and opened three women-friendly spaces for women to meet and identify their needs.

We also provide long-term support to help rebuild communities and strengthen their resilience to future disasters.

We do this in several ways.

A large number of primary school children in publicly-funded schools are studying in hazardous conditions. Children are usually faced with ramshackle classrooms with unsound walls, leaking roofs and unstable flooring.

Our work involves analysing the education budget, conducting surveys, and making accurate measurements to determine the level of damage to the school buildings, and working with communities to build a roadmap for the coming years.

We help local people to lobby their governments for school budgets and we train them so they can oversee the management of repairs.

Wahida prepares a bottle of milk for her 2-year-old old son, Habibi, after the tsunami destroyed their home.

The impact of the 2018 tsunami on women and children

Wahida's family home was destroyed by the earthquake and tsunami. She had to move to a coconut farm which was turned into a shelter for displaced people.

There were limited supplies for pregnant women and new mothers during the crisis. People were getting ill due to poor nutrition and unfiltered drinking water.

Read more about our response to the Indonesian tsunami