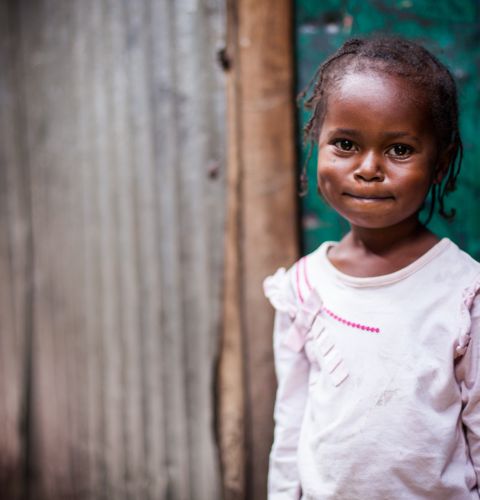 We’ve been working in Kenya since 1974. We focus on supporting local women’s groups who stop women and girls from being abused and make sure survivors are heard, treated and have the backing of the law.

Learn facts about Kenya, the issues the country faces, and what ActionAid is doing to support communities in Kenya.

That’s why we run a network of projects across Kenya that support girls into schools, keep girls from dropping out of school, and help girls to catch up on learning they’ve missed.

And that’s why we’re asking you to help invest in a girl’s education, and unlock her power. Your donation today could help a girl open the door to a brighter future.

Why we work in Kenya

Kenya is the largest and most advanced economy in east and central Africa. Yet nearly half of the population live below the poverty line.

Women and girls in Kenya do not enjoy the same rights as men. They’re often denied an education and the right to own land.

Many are also subjected to domestic violence, sexual exploitation, and harmful practices such as female genital mutilation (FGM). Although FGM is illegal in Kenya, in highly traditional areas up to 98% of girls could be at risk.

Hundreds of thousands of children in Kenya are malnourished due to the effects of living in extreme poverty, and many children die before their fifth birthday.

Recent droughts left millions of people in need of food aid and flooding in the Rift Valley is common, displacing thousands of people and destroying crops.

What we do in Kenya

We train women’s groups to take up cases of violence against women and girls by working proactively with the police, health workers, courts and women lawyers.

Our work with women’s groups, girls’ clubs and rescue centres is helping to stamp out domestic violence and abuse, forced child marriage and harmful traditional practices such as female genital mutilation (FGM).

We're supporting local girls’ clubs that provide information about periods, sex and pregnancy, so girls are better informed about their bodies. We work alongside local women’s groups to tackle period poverty and help girls in some of the poorest communities in Kenya access sanitary products. By giving girls the resources they need to manage their periods with dignity, we’re helping to break cycles of poverty and challenge gender inequality.

We’ve set up hundreds of local farmers’ groups and trained them in modern farming methods. We help communities grow drought-tolerant crops and share their knowledge so they don’t have to go hungry. During times of drought we support the poorest communities through feeding programmes, and our innovative farming and water harvesting projects help families build long-term resilience to drought.

Our response to the East Africa food crisis

Since the onset of the crisis in February 2017, ActionAid Kenya has supported approximately 93,330 people​ suffering from the drought. Our response has included the distribution of cash and food transfers, as well as setting up school feeding programmes.

How we’re changing lives for good in Kenya

Through ActionAid girls’ clubs and rescue centres, 6,000 women and girls have been reached directly and 60,000 indirectly. Read stories of women and children we've helped.

Olive holding her daughter, Grace, now 13, who has learning difficulties and a hearing impairment. This image has been pixellated to protect Grace's identity.

Justice for survivors of violence

While Olive’s eight-year-old daughter, Grace, was out playing, she was raped by a 65-year-old man.

Mum Olive, 36, remembers: “When I heard my daughter had been raped I was so scared I couldn’t move. I felt a horrible pain in my stomach.”

Thanks to Alice – a local community volunteer who works with ActionAid and our local partner, the Wangu Kanja Foundation, to stand up to violence in her community – the perpetrator was arrested and has received a sentence of life imprisonment.

Grace, now 13, is deeply traumatised by her experience, but is doing well at a specialised unit at school and receives regular counselling from the Wangu Kanja Foundation.

“I am very grateful to Wangu Kanja and ActionAid for supporting my family,” Olive says. “Through them I have met other mothers whose children have been attacked. Now I do not feel alone.”

Donate to support our work

When Everlyne was just 14, her parents wanted to take her out of school as they felt they couldn't afford it, and there were discussions about her getting married.

Thanks to ActionAid’s work in the community, Everlyne knew her right to stay in school and that she could go to her head teacher for help. He threatened to report Everlyne’s parents and convinced them to let her continue. They were regretful and are now supportive of her studies.

Everlyne is now one of three girls in her village that have gone on to secondary school. She says: “My favourite subject is biology. If I do well, I’ll have a better life.”

Thanks to ActionAid support, Everlyne, 15, is one of the first girls in her village to attend secondary school, West Pokot, Kenya

An innovative beekeeping project supported by ActionAid is benefitting 4,200 people in Kuria. Designed to provide women with an independent source of income, the project is run by a local community organisation and 20% of the profits go back into running the business. The scheme has made a big difference to women's lives, giving them their own money so they can put food on the table.

Josephine, who has been helped by the project, says: “Fifteen litres in one hive is a good harvest; sometimes in the dry season you get less. I sell some of my harvest, but keep some to eat because it is very nutritious. I have four hives from ActionAid.”

Find out more about our work on ending hunger

Thanks to an ActionAid supported bee keeping project in Kenya, Josephine is earning her own income

Thanks to an ActionAid girls' group, Judy and her classmates know how to manage their periods with dignity.

Judy is 12 years old. She hasn’t started her period yet but when she does, she won’t be afraid.

ActionAid is working in Kenya to tackle period taboos and improve access to sanitary products. In our local girls’ clubs, Judy and her friends can learn how to manage their periods with dignity and become better informed about their bodies. By giving girls the knowledge and confidence to say #MyBodyIsMine, we’re making sure periods don’t hold girls back.

Judy says: “During our girls’ forum, our teacher explained to us that if you see your period, you should not be scared. We can use the pads, change it in the evening and take a shower.”

Find out more about our work on menstrual hygiene