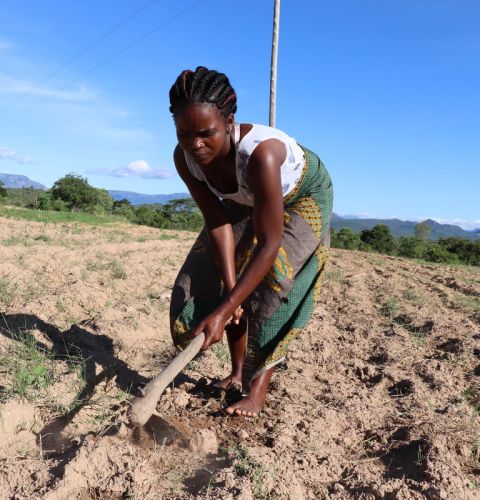 ActionAid is working in Zimbabwe where 7.7 million people, half of the country’s population, are at the risk of facing severe hunger in 2020.

In the aftermath of 2019’s cyclones, erratic rainfall, drought and flooding, much of the crops planted by farmers and households have been washed away.

Right now, ActionAid is working with local communities to provide urgent supplies of food and water purification tablets to as many people as possible in Zimbabwe and neighbouring countries.

People in Zimbabwe are still facing the devastating consequences of the coronavirus pandemic. Our emergency response has supported more than 44,000 people across the country as of April 2021, but we urgently need to reach more vulnerable communities.

Thanks to ActionAid donors we have distributed at least 35,000 food packages for people in need, including cooking oil, salt and beans, along with thousands of PPE items for health workers and hygiene kits for women, including menstrual products and soap.

Amidst a worrying rise in cases of violence against women and girls, we’re also working to protect women’s rights through robust prevention and awareness-raising tactics, including radio and SMS campaigns.

Please support our work by donating to our coronavirus appeal today.

Why we work in Zimbabwe

Zimbabwe is a landlocked country in Southern Africa, bordered by Zambia, Mozambique, Botswana and South Africa.

After gaining independence in 1980, Zimbabwe’s food production has declined sharply as a result of the reallocation of land. Food scarcity has been made worse by severe droughts, meaning that since 2000, Zimbabwe has struggled to feed its people. One in four people in Zimbabwe now relies on international aid for food.

ActionAid began working with local communities in Zimbabwe in 1997. We provide long-term supplies of safe water, like boreholes, help farmers improve crop yields, and support women with loans to help them build businesses.

We also train the poorest people in their rights to basic services such as healthcare, clean water and education. And our local staff provide emergency food and water programmes for people most affected by drought.

What we do in Zimbabwe

Battling the effects of drought

In 2016, the devastating effects of the El Niño-induced drought left close to four million people in need of food aid in Zimbabwe. Many children stopped going to school because they were too hungry and weak to walk to school.

In response to people's needs, ActionAid runs feeding programmes in schools across Matabeleland North Province, giving the most vulnerable children a daily meal of corn and soya porridge.

We also help farmers to improve crop yields with better farming techniques. And families are given the chance to take out loans from ActionAid-supported credit groups, helping them to build a business and provide for their future.

With estimated unemployment rates of up to 95%, many people in Zimbabwe find it difficult to cover their families' basic needs, such as food and clothing. That’s why local ActionAid staff in the Nyanga region helped to set up the Rural Women’s Assembly, a collective of women who share advice and work together to improve their lives.

Nearly half of all women in Zimbabwe experience violence in their lifetime. ActionAid’s Safe Cities campaign educates communities on women’s rights, giving them the skills to make their communities a safer place for women and girls.

In Harare and Chitungwiza our local staff are training women to lobby the government for basic protection, such as street lighting, as well as training police to take violence against women seriously. The project will benefit over 30,000 women and girls affected by violence.

The aftermath of several cyclones, drought and intense floods has resulted in the current food shortage in Zimbabwe.

Intense flooding has washed away much of the crops that were planted by farmers and households last year. While in recent months, a lack of rain has meant that newly planted crops will not be ready to harvest in time to avert hunger.

Reports of theft and prostitution have increased as a way to deal with the crisis in some parts of the country.

ActionAid is scaling up to respond to this crisis.

Based on the assessments so far, we have identified the following priorities:

Find out the latest news from the countries affected by the Southern Africa food crisis.

In March 2019 Zimbabwe was affected by a devastating cyclone that made landfall in southern Africa.

Possibly the worst weather-related disaster to ever hit the southern hemisphere, the cyclone killed at least 1,000 people and left 400,000 without a home.

In Zimbabwe, we provided thousands of kilograms of food and cooking oil, distributed sanitary pads, underwear packs, towels and soap.

We also set up women-friendly spaces where women and girls could receive psychological support.

Find out more about Cyclone Idai and how it affected people in Zimbabwe. 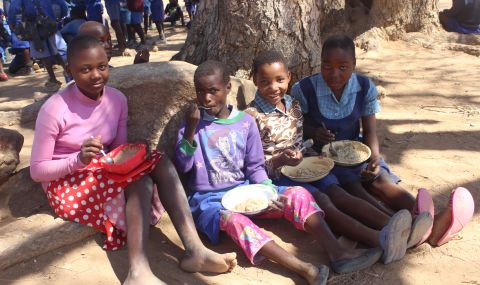 11-year-old Melody (second from right) and her cousins eating porridge at their school in Ward 18 of Nyanga District, Zimbabwe. There are 3,143 children in this area receiving food support through ActionAid's partner Simukai Child Protection, in response to El Niño related drought.

El Niño, a cyclical weather phenomenon, has increased the severity of droughts. Many families are living on one or less meals a day. Children are often too weak to go to school and struggle to concentrate because they are too hungry. With rivers drying up and wells overburdened, girls and women have to queue for hours to get limited water.

Women make up 70% of the agricultural workforce but rely on men to provide land according to customary law, which says that women should not own land. This makes it even harder for women to support themselves and feed their familes.

Supporting women to earn an income

Melody Murwira, 32, is a farmer and mother of four children. Before joining the Rural Women’s Assembly, supported by ActionAid, she was financially reliant on her husband, but he didn’t have a stable income. “Life was hard,” Melody said. “My children were chased out of school all the time because I failed to pay their school fees.”

Together, the assembly raised money by doing jobs around the village, which Melody and the other members invested in livestock and poultry. Each member now has five goats, five sheep and 25 hens. Selling the lambs and kids is enough for Melody to support her family and keep her children in school. Her son, Brighton, 19, is learning how to care for the livestock.

The group also provides funds for school fees, uniforms and books for children in the community who could not otherwise afford an education.

Learn more about our work with women and girls

“Last harvest the crops did not grow,” says Watson, nine. “My siblings and I would go to school and spend the day on empty stomachs. Sometimes I would skip school because I was so hungry." To help stop children like Watson going hungry, our local staff set up a feeding programme in 19 schools across Matabeleland North Province, giving the most vulnerable children a daily meal of corn and soya porridge.

"Now we have porridge here at school, every day in the afternoon," said Watson. "I always come to school and because I’m not hungry I can pay attention to my lessons.” Watson’s teacher, Moses Nyangoro, said: “Before the feeding programme, almost half of a class of 34 pupils would be absent. Students were performing badly in class due to hunger. Now the classes are almost full again.”

Read more on our work on food and hunger

School going children not spared by drought as ActionAid chips in

Josephine Manyonga, 60, is from Samanyika village, in Nyanga district. Since the 2014 typhoid outbreak, ActionAid has dug new boreholes providing communities with clean, safe water. Local staff also train women to educate their communities on how to prevent typhoid, cholera and other waterborne diseases.

“We were used to getting water at any source that we would come across,” Josephine explained. “We had no boreholes and many people from this village were affected by typhoid. However, things have changed and now we have safe water to drink and use for cooking.”

Donate to support our work