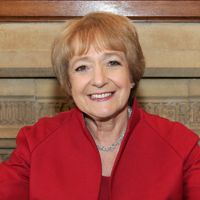 Member of Parliament for Barking

"UK Government must be consistently transparent in aid spending"

Member of Parliament for Barking

Rt Hon Dame Margaret Hodge, Public Accounts Committee chair until 2015, visited Zambia with ActionAid UK earlier this year to see how the UK foreign aid budget saves lives. While the Department of International Development is regarded as a world leader in effective aid, a National Audit Office report published today criticised the lack of transparency among other government departments spending that money. Here, she reflects on the report and on the urgent need for action to ensure taxpayers - and beneficiaries - get value for money.

"Through their taxes, British people make a huge difference to the lives of some of the poorest people around the world.

This money, spent through the government’s aid budget, means we can respond effectively to emergencies such as the current food crisis in East Africa, tackling violence against women from Pakistan to Haiti, or helping to send girls to school.   I am proud of the UK’s commitment to spend 0.7% of our national income on international aid, and have seen the impact that it has on the ground. Earlier this year I visited Zambia with the international development charity ActionAid UK, where I saw for myself how UK aid helped prevent the spread of cholera in a slum on the outskirts of Lusaka, the capital.

I am proud of the UK’s commitment to spend 0.7% of our national income on international aid.

This morning, the National Audit Office (NAO) – the Government’s spending watchdog – published a report into the way UK aid is spent.  While the Department for International Development (DFID) is widely recognised as a world leader in delivering transparency and accountability, and in measuring effectiveness when fighting poverty, the NAO report found that some other government departments spending parts of the UK Aid budget do not meet those high standards.

This is of particular concern as the proportion the aid budget that is spent by those other departments is growing. It made up 14% of all foreign aid in 2014, rising to 20% in 2015 and expected to grow to 30% by 2020. The British taxpayer, quite rightly, wants to see the highest standard of accountability and effectiveness across UK Government - and they are currently not getting that from the non-DFID spenders of our foreign aid budget.

What’s more, the report published today by the NAO finds that no single part of government has overall responsibility “for monitoring the overall effectiveness and coherence” of the budget spent across all departments. The report also notes that the aid strategy published by the Government in 2015 did not clearly set out how “to identify which part of government – either on its own or jointly – has responsibility for implementing it or for checking on its progress, or is ultimately accountable for its delivery”.

It’s not just the NAO that has raised concerns. Publish What You Fund, a global campaign group working to raise levels of transparency in aid spending, compiles an annual Aid Transparency Index. In 2016 the Index rated DFID as “very good” on transparency, while the Foreign Office was rated “poor” and the Ministry of Defence “very poor”. Increasing the aid allocation to departments not yet upholding high standards of transparency damages the credibility of our aid commitment, and diverts attention away from the transformational impact this money has on the ground.

As a former Chair of the Public Accounts Committee, I have long pushed for more effective and transparent government spending. It is vital that the UK’s aid budget delivers the best possible value for money, both for the sake of UK taxpayers and the people in developing countries it is there to help.

It is vital that the UK’s aid budget delivers the best possible value for money.

That is why I agree with organisations such as ActionAid UK that are calling on the Government to address this. As a starting point, they have asked for the amount of Overseas Development Assistance (ODA – the official name for the foreign aid budget) spent by government departments other than DFID to be frozen or reduced, until those departments can show they are as transparent and as effective at fighting poverty as DFID. I also support their call for the International Development Committee to re-open its inquiry into the spending of UK aid by other government departments, which was cut short early due to the calling of a snap general election. I hope the Government will take its findings, and those of the NAO report today, seriously.

Finally, I hope the Government will take this opportunity to identify where overall responsibility for measuring and ensuring value and effectiveness in the management of the entire UK aid budget sits. I want to see the Government confirm that the International Development Act 2002 (and its 2014 amendments), which requires all UK aid to focus on poverty reduction and pursue gender equality, applies across all aid spent by all departments - not just to programmes delivered by DFID.

UK Aid is transforming the lives of millions of people in poverty around the world. Through DFID, the UK remains a world leader in the transparency and effectiveness of aid. But the government must act quickly on the findings of this report. As the aid budget is spread among more departments, the complexity of the work grows exponentially – so a clear way to assess and report its use is a must."