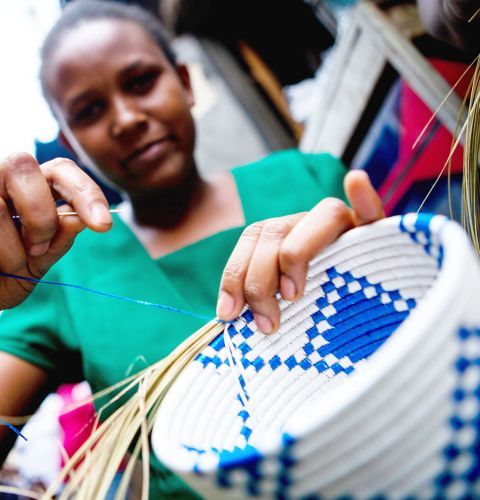 Gender discrimination means that women are more likely to be in insecure, low-wage jobs, be paid less for the same work and have limited access to land and loans.

If women in developing countries were paid as much as men and had the same access to jobs as men, they could be US$9 trillion better off.1

ActionAid supports women to access secure jobs in safe working environments, free from all forms of violence. Women must be paid living wages that are equal to men's, enjoy social protection such as paid maternity leave, and the burden of unpaid domestic work that falls to women must be reduced.

This is vital in enabling women to have control over their own lives.

Areas we focus on:

4
the number of years that a woman will work more than a man over her lifetime, including unpaid care4

What are economic rights?

Economic rights include the right to decent work, to equal pay and to land and adequate housing.5  These are rights that women living in poverty are often denied.

Women who are also discriminated against due to other aspects of their identity - such as their age, religion or ethnicity - face even greater barriers to the fulfilment of their economic rights.

The impact of unpaid care and domestic work

Globally, women take on three times as much unpaid care work as men.6  This includes caring for children, the sick and the elderly, taking care of household tasks such as cooking, collecting water and subsistence farming.

The poorest women in the world face the largest burden of unpaid work, because of the lack of public services and infrastructure - like healthcare and clean water - to support them.

More women are getting paid jobs, but the amount of unpaid care work that they face at home is not being reduced at the same rate. This leaves many women facing a ‘double burden’ of work inside and outside the home. When paid and unpaid work hours are combined, women currently work longer days than men in nearly all countries.7

A young woman entering the job market today can expect to work four years more than her male counterparts over her lifetime, due to balancing paid work and unpaid care responsibilities.8

The time and energy spent on care work may not leave enough time in a day for decent paid work, for studying, for taking part in women's rights organisations, or for rest and leisure. This means that unpaid care responsibilities also narrow women’s choices in the type of job they get, often forcing them into informal, part-time or low-paid employment. This is often reinforced by social norms and perceptions around the role that women 'should' play in the family and in wider society.

As a result, many women are financially dependent on male partners or family members. This can limit the choices that a women has, including her ability to leave a violent partner.

Women’s lives are affected by the burden of unpaid care work at every age. Older women work for longer and girls are pulled out of school to do household chores, denying them their right to education.

Women are more likely than men to have a job in sectors where pay and conditions are the lowest. The International Labour Organisation (ILO) estimates that in 2012 more than half of all employed women worldwide were in informal employment.9

Many women have no basic protection or rights at work, because their jobs are not covered by labour law. This means that they will not receive sick pay, maternity pay and cannot join a union, exposing them to high rates of human rights abuses, including sexual violence. Even when labour laws are in place, women employed in both the formal and informal sectors are at a high risk of exploitation because these laws are often limited and not implemented.

Women from developing countries are among the most vulnerable to exploitation in global supply chains. Approximately 80% of the world’s garment workers are women.10  They often work in dangerous environments. In April 2013, the Rana Plaza garment factory in Bangladesh collapsed killing over 1,100 people, most of whom were young women from low income families. This was a stark reminder of the shocking conditions that women continue to face in the supply chains of international corporations, and the lack of recourse to justice.

Women’s rights organisations and movements play a critical role in protecting and advancing the rights of workers. ActionAid has been supporting workers' rights groups in several countries to campaign for fairer pay and safer, more humane, working conditions.

When women are paid for a job, they earn on average between 10% to 30% less than men for work of equal value.11

The ILO estimates that at the current rate of progress it will take 75 years to make the principle of ‘equal pay for equal work’ a reality for women and men.12  Women’s unpaid care work contributes to the overall gender pay gap, as this effectively means that women are subsiding the economy with free and often invisible work.

Campaigning for workers’ rights in the garment industry in Cambodia

Workers from some of Phnom Penh’s export garment factories took to the catwalk in 2014 in the clothes they produce for global high-street brands. The event, "Beautiful clothes: Ugly Reality", was organised by ActionAid Cambodia’s local partner, Workers Information Centre (WIC).

It sent a powerful message directly from the workers — 80% to 90% of whom are women - to the Cambodian government and the multibillion dollar brands, to demand an end to their exploitation.

Their demands included raising the monthly minimum wage to afford a dignified standard of living, and an end to short-term contracts that deny women maternity leave and expose them to effective dismissal if they fall pregnant.

Other demands include an end to forced overtime, to be treated with respect and not subjected to violence; and opportunities for higher education.

Garment workers take to the catwalk in a protest against low pay and poor working conditions.

Women's economic rights are affected by economic policies, including how governments raise and spend taxes, and shape trade and investment deals. This is because these policies have a direct impact on the quality and availabity of public services, which women are dependent on because of their unpaid care work, and which are vital in tackling violence against women and girls.

Economic policies determine how many decent jobs are created for women, as well as protecting the rights of local communities who challenge abusive practices by powerful corporate and state actors.

Fiscal, trade and investment policies must be proactively designed to promote and protect the rights of all women and girls.

Legal barriers to economic rights include difficulties in getting an ID card or passport, opening a bank account or accessing credit, having maternity and paternity leave and owning and inheriting property. 128 out of 143 countries have at least one legal difference that restricts women's economic potential.13

Even when women have legal rights in these areas, social norms can stop them from claiming them. ActionAid helps women to understand their rights and how to claim them.

Zenia is a member of a women land rights group in Malawi.

Women reclaim their land in Malawi

In Malawi, women farmers produce 70% of the country’s food. Despite women inheriting land from their mothers, men often grab it from them, taking the largest cut of the profits.

“My brother tried to steal land from my us when he brought his new wife to the village,” says Zenia. “Traditionally we do not question male relatives, so I felt powerless to stop him.”

Zenia joined an ActionAid women’s group where she learned about her legal rights and how to assert them. She worked with community members and successfully reclaimed her land.

Find out more about our work in Malawi

When many women raise their voices together, they gain strength, courage and protection. This is why women's collective action - in women's rights organisations and movements, unions and cooperatives - is vital in women's economic empowerment and in tackling violence against women and girls.

Women’s rights organisations and movements have fought long and hard to highlight injustice and demand greater accountability from governments, helping to shape policies that advance women’s rights. For example, the efforts of women’s movements from countries across the world helped ensure there was a specific target on addressing women’s unpaid care work in the 2015 Sustainable Development Goals.

Shilpy joined her parents in a factory in Bangladesh when she was just 12.

"Garment workers were never respected in our society” she says. “We used to work 14 or 15 hour days, we didn’t get any leave, and often the wages we did earn were paid a month late.”

ActionAid has set up 'Rights Cafes' next to garment factories in Bangladesh. At the cafes, female workers get together to learn about their legal rights, organise peaceful protests and lobby the government over their working conditions.

After two years at the cafe, Shilpy became the leader of a women's group and now helps to educate other women about their rights.

"Now they don’t delay paying our salary; and they pay us our overtime accurately. There is also no abuse on the garment floor anymore. The line manager used to shout at us all the time and we would get beaten. There were also cases of sexual harassment. But now this can’t happen because we know it is wrong,” she adds proudly.

Learn more about what we do in Bangladesh

Shilpy is a women's leader trained in one of ActionAid's Rights Cafes in Savar, Bangladesh.

As well as being a fundamental right, educating women and girls is a crucial step in supporting women’s economic rights.14

Educating girls has enormous and far-reaching benefits to their rights. It reduces rates of child marriage, promotes healthier and smaller families, improves jobs opportunities for women and empowers women to become leaders at community and government levels.15

Around the world, 263 million children are still out of school, and twice as many girls as boys will never even start school.16  These has been an increase in the numbers of girls in education over recent years, but this is not always translating into better employment opportunities for women.17

This shows how entrenched gender discrimination is in wider society, including in labour markets, and the huge burden of unpaid care that falls on women of all ages.18

When Tadiwa turned 11 she had to stop going to school, because her mother could no longer afford the fees. However, her older brother continued his education.

“I miss my friends at school as I am no longer seeing them. I want to be a teacher if given an opportunity to go to school,” Tadiwa says.

Tadiwa is one of the 3,000 girls who will benefit from ActionAid Zimbabwe's drive to overcome barriers to girls' education. The project was started after discussions with local communities showed that most families invest in educating boys over girls, because boys are expected to provide for the family while girls are expected to marry.

Read more about our work on girls' education

11-year-old Tadiwa had to stop going to school because her family couldn't afford to send her, but her brother continued to go.