A policy discussion paper on an alternative Foreign Direct Investment (FDI) framework for more and better jobs in developing countries.

The benefits of inward Foreign Direct Investment (FDI) are not always automatic in developing countries, particularly in relation to employment. To encourage FDI, workers’ rights may be eroded; domestic firms may be crowded out; mergers and acquisitions often result in job losses; and women are largely engaged in unskilled, labour intensive activities.

To get the maximum out of FDI, countries impose a range of market access provisions and performance requirements on the investor such as local content obligations which increase linkages with domestic production enhancing local jobs.

However these policies are increasingly prohibited through ‘investment liberalisation’ as developing countries sign bilateral investment treaties (BITs) and in investment chapters of Free Trade Agreements (FTAs).

These BITs and FTAs also include ‘investment protection’ through investor-state dispute settlement (ISDS) which give exclusive rights to companies to sue governments in private courts if for example they believe that their profits are at risk from government regulation (such as the imposition of a minimum wage).

As such, current investment agreements are not conducive to sustainable development, more and better jobs, and the eradication of poverty in developing countries.

An alternative FDI framework is required, one that balances the rights of investors with obligations; does not restrict government’s ability to regulate in the public interest including labour provisions or to restrict their ability to impose performance requirements and other provisions that lead to more and better jobs for both men and women.

Additionally, in this alternative FDI framework Investor-State Dispute Settlement (ISDS) is removed and replaced with dispute prevention and settlement via national courts and/or state-to-state arbitration; and companies are held accountable for their actions at both a national and international level. 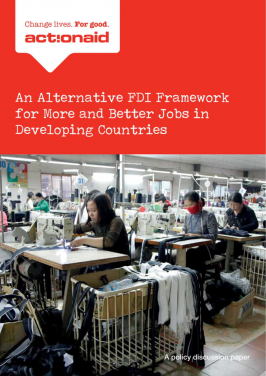