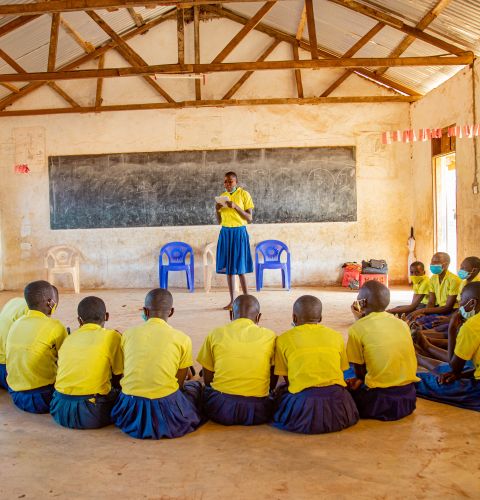 In spring 2018 we ran a three-month UK Aid Match appeal, ‘Not This Girl’. All donations from our supporters were matched by the UK Government, pound for pound.

Thanks to the generosity of our supporters, we raised £2.3 million, including £1.1 million of match funding from the UK government.

This match funding went towards the work of ActionAid Kenya and local women's groups and networks in rural Kenya to prevent and respond to violence against women and girls. Our goal was to help vulnerable girls and community members to become empowered to challenge and report cases of violence.

£1.1m
was raised to tackle violence against women and girls in Kenya

Where did the funding go?

We ran the project in three counties in Kenya (Homabay, Garissa and Kilifi) which have low rates of girls’ education and high prevalence of early marriage, teenage pregnancies, female genital mutilation (FGM) and HIV/AIDS.

Girls, many of whom are child heads of households, are also vulnerable to transactional sex exploitation and violence in these areas.

What did we do?

What was the impact?

Of the 890 adolescent girls interviewed at the end of the project, 87% said that acceptability of violence had reduced in their community, compared to three years ago (prior to the project start).

They said the community was now taking cases seriously and reporting them to the authorities, which had resulted in a reduction of violence.

The majority of girls (87%) also said they were now more confident reporting violence than they were three years ago.

Initially, rape cases were very many and nothing was done to the perpetrators. These days, the cases have reduced since people have taken such violations seriously and perpetrators are caught and taken to the authorities."

We also interviewed members of local Women’s Rights Networks at the end of the project. 91% of these women agreed that cases of violence were more effectively responded to by duty bearers, compared to before the project.

93% reported increased confidence in their ability to support survivors.

The project originally aimed to have 5,340 girls across the communities access safe spaces, and the knowledge and skills, to respond to cases of violence.

By the end of the project, 5,464 girls had accessed safe spaces, like dedicated school forums and peer support groups.

Traditionally girls believe that the boys are better than them because of low-esteem but this is increasingly changing, thanks to the forums."

For a long time, this community has considered FGM as a rite of passage for girls into adulthood. It has been culturally accepted and has become very powerful and has lasted generations. And, if a culture lasts that long, extinguishing it is not something that can be done in a day or two. But slowly as people are educated it fades with time." 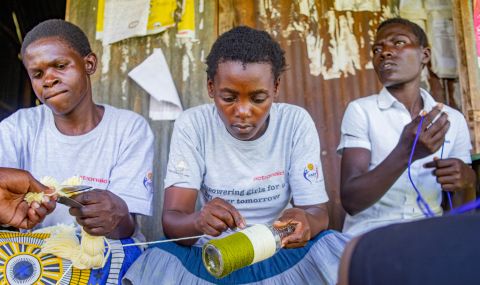 Sustainable skills for women and girls

Many girls said that poverty was a major contributor to their vulnerability to violence: girls who weren’t able to afford basic necessities like food, sanitary pads and clothing were more vulnerable to predatory men who promised to meet their needs.

Some women mentioned that their husbands didn’t properly provide for their families and if the women would ask for financial assistance from them, this would be met with verbal or physical assault.

But they said that having a source of income would shift their bargaining position within the household, and therefore decrease the likelihood of violence.

Many of the out-of-school girls we interviewed had formed savings groups during the project, and said they will continue with their groups after the project ends. The groups have helped to ensure they have a support system in place – not just for their economic well-being, but also their social and mental well-being.

We have a savings group where we contribute some money every week and whenever one has an emergency, they can ask for money from the group. This has prevented people taking advantage of us due to financial needs."

"I dropped out of school due to pregnancy and to speak the truth, life has not been very easy," says Dorine, an out-of-school girl from Kenya. "I had to depend on other people to provide for myself and the child.

"Even getting basic items like sanitary towels is a challenge when you are in that situation."

But thanks to the Not Any Girl project, Dorine was one of many girls and young women to attend a Girls' Forum led by a mentor from a local Women's Right Networks.

At the forums, girls learn about gender-based violence, understanding their rights and how to report cases of violence.

They also learn entrepreneurial and artisan skills that help them develop a sustainable income.

Dorine trained in hair and beauty; she is now running a beauty and cosmetic shop. She is earning enough money to take care of her family and save for the future.

Dorine Odondi, an out-of-school girl from Kenya, with her baby.

Ziporah, a young mother of two, is now working as a tailor and can provide for her family.

Zipporah is from Homabay County, and she also dropped out of school at a young age. Her parents couldn't afford the fees, and instead Zipporah got married immediately.

"It has been a tough life depending on my husband for everything," she said. "Sometimes he doesn’t and we go hungry."

But Zipporah has now trained as a tailor and bought a sewing machine with a loan from the local women's group.

The tailoring business is doing well and I am able to afford basic things for the family without depending fully on my husband. This has reduced conflicts at home," she says.