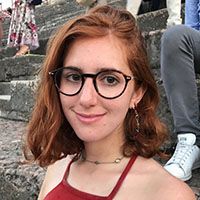 ActionAid has been working with the England and Uganda netball teams to promote our work ending violence against women and girls living in poverty. Ahead of a series of matches between the two teams, we spoke to Peace Proscovia – a star shooter for the Ugandan team and Australia's Sunshine Coast Lightning club. 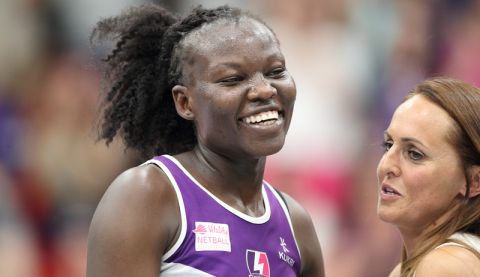 Peace, 29, was born in a small town called Arua in northern Uganda. One of seven children, she looked set to follow the path of the other girls she grew up with, many of whom were forced into child marriage.

However, Peace's talent at playing netball enabled her to forge her own unconventional path. In 2015 she was signed by the UK's Loughborough Lightning team and moved to the UK to pursue a successful sports career. She has since competed in major tournaments, been signed to Australia's Sunshine Coast Lightning club and been named Uganda's athlete of the year.

Peace spoke to ActionAid about her childhood, ending violence against women and girls and how she imagines her life would look without netball.

As a young girl, what did you want to be when you grew up?

"All I wanted was to go to school like other children, but I was not specific about what I wanted to do when I grew up. There was no career guidance given to me.

Given my background, career guidance was useless because my future did not seem bright."

"While growing up I saw women and girls going through a lot of violence and I thought that I was unfortunate to be born a girl.

Women could be beaten like children and most girls were denied some of their basic needs, like education. To make it worse, girls would be forced into marriage to get money for their family.

I had classmates who were forced into marriage in primary school and even now I believe that wherever they are – if they are alive – they are continuing to weep and suffer.

Growing up, I thought that I was unfortunate to be born a girl.

When I look back, I realise that the conditions of bringing up children is not favourable to those living in poverty, who see girl children as a source of wealth. If these parents have equal opportunities to be educated, I believe that would not be an issue."

How would your childhood have looked without netball? 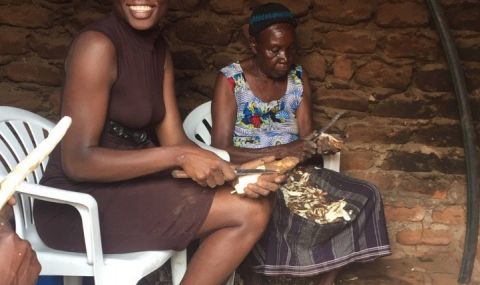 Our Christmas appeal focuses on ending violence against women and girls at home. What does home mean to you?

"It does not matter how fierce the circumstances may be at home, it’s always the best place to be. For reasons here and there, I cannot go home at the moment – but I personally miss home.

I am grateful to the Loughborough Lightning netball club for making me feel at home, and now [the Australian club] Sunshine Coast Lightning that again gave me an opportunity to be here and feel at home too."

How did you become a professional netball player?

"It all started with 2015 World Cup qualifiers game in Botswana in 2014. Loughborough Lightning netball club in England sent a scout to pick the best shooter of the tournament.

Fortunately, I happened to be her, and my move [to England] came like an answered prayer. Much as I was afraid of what was ahead, I had to stay focused and determined.

Change is a challenge for everyone, but again it comes to make life better."

Has your family been supportive of your netball career?

"At the start they did not think that it was very valuable, but now they see the value and support me emotionally." 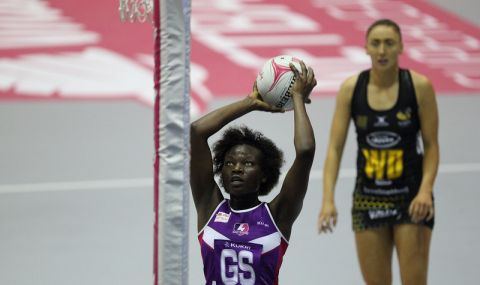 Peace in action at a netball match. Photo: Loughborough University

If you were not playing netball, what do you think your life would look like now?

"Based on the fact that I grew up in a community where girls grow up to be mothers without the privileges of going to school, I would probably be a mother to more than five children, working hard to make them survive."

Do you have a message for young girls in Uganda who want to pursue a sports career?

"Life is a journey that you must walk with full determination. In the fiercest storms of life, being talented at something like sports can be an anchor for you to lean on when there is nothing else to support you.

Netball paved the way for me in so many ways, and could do the same for someone else. Self-motivation is key to success and passion drives you a million miles.

When no one is there for you, let the works of your hand do it for you because we are rewarded by the works of our hands."