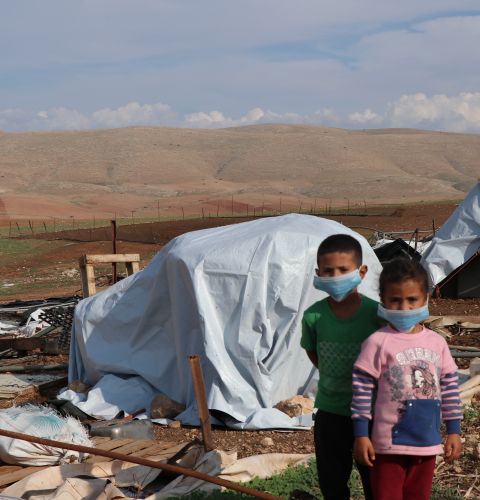 In armed conflicts, the underlying acceptance of violence against women and girls in many societies is heightened by insecurity and displacement. This means that women and girls are more at risk of forms of violence including mass rape, sexual slavery, forced pregnancy, forced "marriages" and being forced to offer sex in exchange for food or shelter.

Unaccompanied women and girls, lone female head of households, elderly women and those with physical or learning disabilities are amongst the most vulnerable.

Women and girls also often have limited access to basic services, such as healthcare and education, during conflicts. As a result, conflict increases structural inequalities that last for many years.

But women are not just victims of conflict - they are agents too, and play a vital role in peace movements at grassroots levels.

Women and girls in conflict are often specifically targeted for sexual violence.

Mass rape is used as a weapon of war, to systematically torture women and girls and destroy communities through the rejection of raped women and subsequent children, and the perceived humiliation of their husbands, fathers and brothers.1

In conflicts, women can be abducted and forced into military sexual slavery, or be forced to offer sex for survival. In addition to lasting psychological scars, many women face incapacitating physical injuries from brutal assaults and sexually transmitted infections.

ActionAid helps survivors of sexual violence through setting up women's safe spaces where women can share their experiences and access psychosocial support, in countries from Lebanon to Bangladesh.

Azita (not her real name) fled Afghanistan under the Taliban, to try to find refuge in Greece.

Fleeing the Taliban in Afghanistan

Azita (real name and identity protected) fled Afghanistan with her husband and two young sons to escape the Taliban.

“We lived in a small village. Our life was simple but good. Then we were attacked by the Taliban. If you don’t cooperate with them, they kill you," she said. "The Taliban think women are worthless. They are good for one thing only: to be raped. Women have to cover their face and have no freedom at all. Life with the Taliban is living hell."

Her arduous journey to Greece in 2016 meant travelling through deep snowy mountains for days. When they finally reached Turkey, smugglers shut them in a stable with 200 people, and fed them once a day.

"Then the night that I will never forget came. 100 people in one dinghy. When we pushed the dinghy to the sea, it tore at the bottom, but we didn’t know. So, soon enough we were fighting for our lives. We said this is it. This is how we will die."

Of the 10 boats that left the beach, only two reached Greece. Azita's was one, rescued by the Greek coastguard. But in Greece, Azita's position is far from clear.

"They explained to us the application process. But I don’t know what will happen. We don’t want to go back. We have nothing. My life feels like if they put a noose around your neck and kicked the chair and you are sure you will die - and then they put the chair back under your feet."

ActionAid supported women like Azita in Greece through women friendly centres, where they could access psychosocial support and essential items.

The impact of conflict on girls

Child marriage rates are amongst the world's highest in conflict countries.3

In all humanitarian emergencies, ActionAid prioritises the protection of the most vulnerable, including girls, to ensure that they get the critical support that they need.

Rhoda's sister was abducted by Boko Haram in Chibok, Nigeria.

Bring back our girls in Nigeria

In 2014, 276 girls were kidnapped from their school in the Nigerian town of Chibok by militant Islamist group Boko Haram. Rhoda's sister was one of them.

“The day I heard about the kidnappings it was in the afternoon. I heard about the abductions and was thinking this was my sister’s school even before it was confirmed. I couldn’t eat that day, my heart was beating so fast.

“My sister liked reading, she wanted to be a lawyer. Among all of us, she was the one who liked going to school most. She was very intelligent. She is younger than me, but she was a better student than I am.”

Schoolgirls in particular are targeted because Boko Haram opposes education, a fundamental human right. But the group have abducted thousands of women and girls in total from the region. Many are forced into sexual slavery

ActionAid Nigeria has been working for over 15 years, to enable girls in Nigeria to enrol and succeed in school, and is calling on the Nigerian government to fulfil its promise to find and return the remaining girls safely as a matter of urgency.

Girls' education suffers during conflict. Girls are 90% more likely to be out of secondary school than those living in areas without violence.4

Educating girls has enormous benefits. It reduces rates of child marriage, promotes healthier and smaller families, improves wages and jobs for women, and empowers women to become leaders at community and government levels. By disrupting girls' education, conflict has a long-lasting impact on girls' lives, and their families and communities.

10-year-old Arwa lives in Gaza. The blockade of Gaza means that it is difficult to get essential items, and the shutting down of Gaza's only power plant this year means that families are only receiving four hours of electricity a day.

"When its dark I’m afraid to go out, even to see my friends. My mum and I can’t go and buy goods from the store, because we’re too scared," Arwa says. "At night, I sleep next to my mom. I don’t even dare to go to the toilet."

Girls like Arwa are terrified of nightfall. Without electricity the streets of their neighbourhood are unlit, putting them at greater risk of violence.

Through child sponsorship, ActionAid's local staff and partners provide direct support to girls like Arwa. In Gaza we help provide rechargeable lights to the most vulnerable so that girls don’t fear each nightfall. We help set up street lighting so that early morning walks to school are less dangerous. And we support children’s clubs, where girls can build their confidence and overcome trauma.

Arwa, 10, lives in Gaza, which suffers from regular power cuts.

The global maternal mortality rate is 210 deaths per 100,000 live births. In conflict and post-conflict situations, this more than doubles to 531.5

Sexual and gender based violence increases during and after emergencies, but access to reproductive health services, contraception and safe abortion is often reduced. Women are often forced to give birth in poor conditions, as existing health systems struggle to cope with lack of resources and an increased number of injuries due to the conflict.

ActionAid supports mothers through providing safe spaces where they can breastfeed, rest and change in privacy. We provide hygiene kits, including sanitary towels, wipes and clean underwear, and help direct women to medical aid.

Sakina, 35, with her six week old daughter Noor Fatema. Sakina gave birth on a boat while fleeing violence in Myanmar.

Refugee mother gives birth in a boat in Bangladesh

Six-week-old Noor Fatema was born on a crowded boat in 2017 as her mother, Sakina, a Rohingya refugee, fled violence in Myanmar.

"My labour pain started at home, and we had to flee; my husband and I had to carry our four children. On the route when my contractions became bad I'd find people to grip on to," Sakina says.

"It's really difficult for me to describe the labour. I felt like I was going to die on that boat. There was a lot of rain and wind. There were women on the boat but they were all in a panic because some of their relatives had died in fires, some had left loved ones behind so they were all distressed and crying. My step mum was there, but she's really old so she couldn't help me.

I gave birth and delivered my baby on my own. Afterwards, I became unconscious. When I came to I was looking everywhere for my baby. I felt so happy when I saw my baby. I forgot all my pain."

Sakina hasn't seen a doctor in the refugee camp in Bangladesh because she can't afford to, even though she isn't able to breastfeed Noor, who is now extremely malnourished. ActionAid is helping women like Sakina through our women's safe space in Cox's Bazar, where they can access information and support.

Although women often bear the brunt of impacts of conflict, they should not be seen solely as victims. Women play key roles in peace movements in civil society and at grassroots levels, and in rebuilding communities in the aftermath of conflict.

However, women are often excluded from official roles at peace negotiations. It is vital that women are able to participate equally as decision-makers in peacekeeping, peace building, conflict resolution and conflict prevention.

ActionAid is committed to promoting women's leadership in emergencies, because women bring vital skills, resources and experience to humanitarian response. We provide training on women’s rights, leadership skills and disaster preparedness, and support women to rebuild their livelihoods in the aftermath.

Esperance set up a woman's cooperative to support widows of the Rwandan civil war.

Esperance was just 17 when the civil war started in Rwanda, in which up to one million people were killed. Her mother was a Tutsi and her father was a Hutu - putting her at risk of violence from both sides.

"The killers kept on coming to our house to look for my mother. My father had to hide her in the forest - all the time he moved her. He brought her food and was the only one who knew where she was. Of a family of 30 only my mother survived."

When rumours started to spread that Tutsis would start killing Hutus in retaliation, Esperance and her sister fled to a camp in the Democratic Republic of Congo. "Life was hard for us in the camp; we could not trust anyone. We didn't have any side to be on."

Returning to Rwanda, Esperance started a woman's cooperative in Rwanda in 2008 for women whose husbands were killed during the war, or who are in prison for crimes commited during it.

"The reason why I wanted to bring this special group of people together is that we have common problems. As single women we need to have an income to provide for our families. We need security and we need others in a similar situation to share and speak to about matters from the children to land rights issues."

The cooperative started by making baskets. It has expanded since ActionAid started providing training in agricultural techniques and business management, and setting up a child development centre as a safe place to children to play while their mothers are at work.

Top image: Children in Humsa village who were made homeless after their home was demolished in the Occupied Palestinian territory. Credit: Riham Jafari/ActionAid.