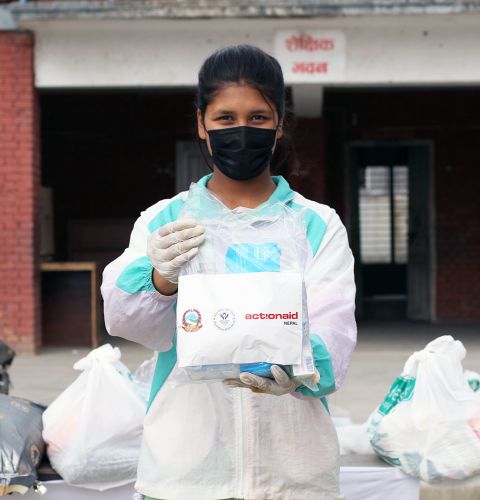 Since November 2019, the spread of Covid-19 has affected and continues to affect billions of people around the world.

As of March 2022, there have been more than 476 million confirmed cases of the disease globally, and over six million deaths.1

The repercussions of this pandemic are enormous. Along with the millions of lives lost to the virus, many more livelihoods have been destroyed - the majority of them women’s, who were working in informal and insecure employment.

Meanwhile, Covid-19 has unleashed a surge in violence against women and girls across the world. In Nigeria, for instance, there has been a 149% monthly increase in cases of violence against women since the beginning of the pandemic, but lockdowns have shuttered and closed life-saving services for women at a time when they have been most needed.

Find out more about coronavirus, ActionAid’s response, how countries have been affected and what you can do to help.

The coronavirus pandemic: facts and figures

As of March 2022, Europe is the region that has been most affected by the pandemic, with more than 197 million confirmed cases.3  But the Americas has seen the greatest number of deaths: more than two million4 .

The US, India and Brazil have seen the highest number of confirmed cases. Brazil has been the worst-hit country in the Latin American region, recording more than 29 million cases and 657,000 deaths - the world's second-highest death toll.5

In the UK, there is a continued rise in infections and a slow increase in Covid hospital admissions; while South Korea, Vietnam, and Thailand are all experiencing their highest wave of infections since the start of the pandemic.6

But as the rollout of vaccinations around the world begins to protect people against infection and death, the gap between rich and poor countries is becoming stark.

More than 65% of people have been fully vaccinated on every continent apart from Africa, where the figure is about 15%.8

Coronavirus disease (Covid-19) is an infectious disease caused by a newly discovered coronavirus.

Most people infected with the virus will experience mild to moderate respiratory illness and recover without requiring special treatment. Older people, and those with underlying medical problems like cardiovascular disease and cancer are more likely to develop serious illness.

The Covid-19 virus spreads primarily through droplets of saliva or discharge from the nose when an infected person coughs or sneezes.9

How is the pandemic affecting women and girls?

As is the case in almost all disasters and emergency situations, women have been hardest hit by the pandemic.

Often being the primary caregivers for children, the sick and the elderly, they are most likely to be exposed to the virus.

They are also more likely to work in insecure, informal jobs – the first to be cut in a crisis.

Meanwhile, the pandemic has unleashed a surge in violence against women and girls across the world, made worse by being locked down or quarantined at home, with little or no access to life-saving services and support networks.

Due to the closure of schools, girls have been put at greater risk of experiencing violence at home – even leading to increases in teenage pregnancies.

ActionAid’s response to the pandemic so far

In April 2020, ActionAid declared an emergency response to the Covid-19 pandemic. Our global response aimed to support close to 15 million people across 40 countries, particularly women and girls and marginalised groups.

Our priorities have been the prevention and containment of Covid-19; protection of women and girls; and providing urgent aid including food and water.

As in all emergencies, we have put into action our women-led, localised response to the pandemic: promoting women's leadership, ensuring women are empowered to make decisions about the needs of their community, and amplifying the voices and representation of women in humanitarian decision-making spaces.

As of March 2022, we have responded to the Covid-19 pandemic in 40 countries across Africa, Asia, the Americas, Europe and the Middle East.

We have reached over 25 million people with our life-saving support: delivering food supplies, distributing essentials like soap and water, funding women’s shelters and combating the spread of misinformation with awareness-raising projects like local radio broadcasts.

What you can do to help

We urgently need your help to reach people affected by coronavirus in vulnerable communities, including in countries facing the Omicron variant of coronavirus.

If you donate £30 you could help provide six families with enough soap for a month, helping them protect against themselves against Covid-19, as it mutates and spreads further. Please donate today.

What to do if you think you have coronavirus

If you are in the UK, and you or anyone you know may have the coronavirus, there are services that can help.

The National Health Service (NHS) provides advice about coronavirus (COVID-19), including what to do if you think you have it and how to reduce your chances of getting it.

What are the symptoms of coronavirus?

If you have symptoms of coronavirus (a high temperature or a new, continuous cough), use the 111 coronavirus service.

What are the number of coronavirus cases and risk in the UK?

The current situation is ever-evolving but you can find the latest information on the UK government's website.