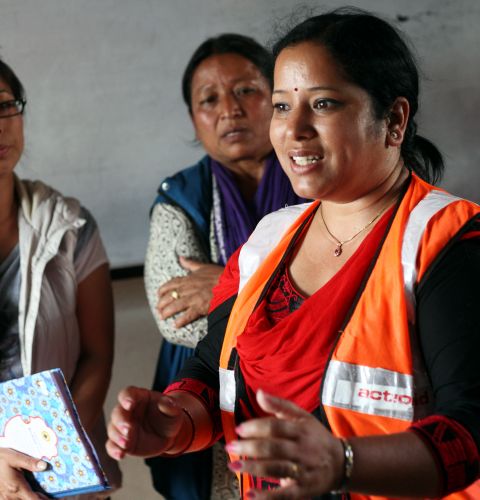 In April and May 2015 two devastating earthquakes struck Nepal, killing 9,000 people and leaving hundreds of thousands of survivors homeless.

Having worked in Nepal for over 30 years, since 1982, ActionAid Nepal staff were able to respond straight away through our networks on the ground, and get life-saving help to the most vulnerable people.

ActionAid reached at least 150,000 people with a range of support: from tools to rebuild homes to business skills to help people earn an income again.

By prioritising women's leadership and protection at every stage of our response and forming women's distribution committees we ensured that women's specific needs were met and that they play an active and valued part in rebuilding their communities.

On Saturday 25th April 2015, an earthquake of 7.8 magnitude struck the historic district of Gorkha, about 76 km northwest of Kathmandu. It was the worst disaster of its kind to hit the country in 80 years, since the Nepal–Bihar earthquake in 1934.

On the morning of Tuesday 12th May, a second earthquake with a magnitude of 7.3 struck 68 km west of the town of Namche Bazaar, near Mount Everest.

What was the scale of the damage? 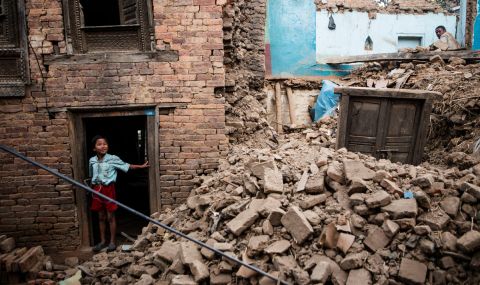 9 years old Rupak looks on as Ram bahadur and his relatives try to excavate their belongings from their collapsed house in the ruined village of Chapagaon. Photo: Prashanth Vishwanathan/ActionAid

What was ActionAid's response to the Nepal earthquakes?

As of April 2018, three years since the earthquakes, ActionAid Nepal has reached more than 150,000 people across six counties – Kathmandu Valley, Sindupalchowk, Rasuwa, Kavre, Dolakha and Makwanpur – through our emergency response programme and ongoing community-led reconstruction programme.

Our existing relationships with local partners and communities meant we could respond quickly and reach some of the worst hit and hardest to reach areas up in the mountains.

This response was possible thanks to the generosity of many individual supporters, as well as the Disasters Emergency Committee (DEC), and the Alborada Trust.

When the earthquake struck, ActionAid Nepal immediately responded supporting more than 118,000 people affected by the disaster with immediate relief. For example:

Laxmi, 35, and her daughter Kanchan, 9, stand inside their new temporary shelter constructed with support from ActionAid in a village in Rasuwa District, Nepal, July 2015

Laxmi's family's home was completely destroyed by the earthquakes, along with all her family’s belongings. But with a toolkit and materials donated by ActionAid, they were able to build a safe temporary shelter.

In July 2015, mum-of-two Laxmi said: "It may not be a lot in terms of cash, but it has made a million dollars' worth of difference to us. What has helped us most has been the corrugated iron sheeting. Before we were staying under plastic tarps, and it was impossible to keep the rain out."

"We had seen the worst of life," she continued, "and we needed a place to have proper family time and feel secure again. The toolkit allowed us to put the pieces together and make that happen. It gave us hope."

Following our initial response, ActionAid focussed on offering training and support to help the most vulnerable people gain access to land to rebuild their homes, and gain the skills they need to set up small businesses and earn a living again. For example:

Our long-term support ensures that communites are able to build back stronger for the future.

Laxmi working on the mushroom farm, providing 10 women with a sustainable income after the earthquakes

When the first earthquake struck on 25th April, Laxmi's house completely collapsed, as well as her shed, killing her buffalo and five goats. ActionAid supported Laxmi with metal sheets and other tools to build a temporary shelter, 15,000 rupees ($140), and training in how to set up a community mushroom farm.

Ten women came together and pooled the money they received for livelihood support to buy bamboo, mushroom seeds and equipment to set up their own farm.

The farm is now providing all ten women with a sustainable income and giving them new found freedom.

Laxmi said: “We are earning very good money from this mushroom farming. We have already earned 70,000 rupees (£845). Women earning is a very good thing. After we work and earn, we can keep this money for our children. Before, we always needed to ask the men but these days we have our say and don’t have to ask for money; that makes me very happy.”

When a disaster strikes, women are the worst affected. In many countries women are not included in decisions that affect them, making it easy for women's specific needs to be neglected. That's why ActionAid uses emergencies as a key opportunity to promote women's leadership and challenge traditional power dynamics. As part of our response to the Nepal earthquakes we took the following actions:

By offering women a safe place to have discussions and enabling them to become leaders, we made sure that women are at the heart of rebuilding their communities. This means their needs will be met by the new plans for their villages, and that they develop skills and confidence to take a more active role in society going forward.

Kamala Kapali, from Khokana Kathmandu, began participating in the Women Friendly Space (WFS) supported by ActionAid shortly after the 2015 earthquake.

This has been an opportunity for her to build economic independence, and challenge the socially and culturally entrenched gender roles in her community.

"Prior to joining the WFS," says Kamala, "I used to think that we as women are obliged to stay home and only engage in the household chores; now I’ve realised women have every right to work outside the home as men do.

"We are equally capable of contributing for the income generation of our families and have the freedom to do so."

Mina is helping to rebuild her community

Mina Kumai Dahal, 24, is a volunteer coordinator of the rebuild of homes and schools in her village of Churetar in Sindupalchowk, central Nepal, following the 2015 quakes.

"I work with the community to find out what their needs and feelings are," explains Mina. "Then I work towards helping them.”

Mina passionately believes that women, who are often silenced during key decision-making, should be heavily included in the rebuild effort.

"When women get involved in the rebuild it shows that they can be leaders. Until now women have not been active as leaders in this community. Women are mostly just involved in household affairs.

"However, there are a couple of women like me who are strongly involved in the rebuild. When other women see us they also want to become more involved. We are setting an example."

Mina is a social mobiliser and volunteer in Sindhupalchowk district, Nepal