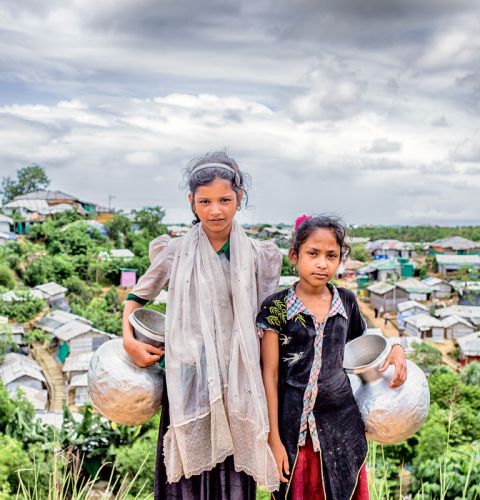 Since 2017, over 800,000 Rohingya refugees have fled violence in Myanmar's Rakhine State and settled in densely-populated camps like Cox's Bazar in Bangladesh - the world's largest refugee settlement.

UN Secretary-General Antonio Guterres has called the Rohingya people: "one of, if not the, most discriminated people in the world."

Find out what the Rohingya refugee crisis is about, who the Rohingya people are, and how ActionAid is helping refugee women and girls.

We are currently responding to the Covid-19 crisis as it affects refugee camps in Bangladesh like Cox's Bazar.

ActionAid is providing support managing the camps; offering women-friendly spaces and distributing approved information on Covid-19 through our protection centres in the Rohingya refugee camps.

Rohingya camp staff have received training on managing risks of gender-based violence during the crisis and psychosocial support is being provided for those in need.

Working closely with partner organisations 7,500 dignity kits have been distributed and over 59,000 people have been reached so far.

The reality on the ground is 800,000 people have to be provided with water with access to latrines and sanitation and sludge management. And that's still not possible. So that vulnerability is there and the possibility of exposure is also very high in this case."

If we act now to protect millions of vulnerable refugees and displaced people, many lives can be saved. Please donate now.

Donate to our coronavirus appeal

What is the Rohingya refugee crisis?

In August 2017, hundreds of thousands of Rohingya refugees fled violence in Myanmar’s Rakhine province, crossing the border into Bangladesh in search of safety.

Now, more than 900,000 people live in the camps at Cox’s Bazar, Bangladesh, including Rohingya refugees who were already living there as a result of previous acts of persecution such as the violent attacks in 1978, 1991-92 and 2016. This makes them the largest refugee settlements in the world.

Rohingya refugees remain in a precarious situation. As they have not been formally granted refugee status, they are unable to integrate into Bangladesh communities and start to rebuild their lives. Unless their safety in Myanmar can be assured, they remain fearful of returning.

In Myanmar, the safety and human rights conditions for the remaining Rohingya communities have continued to deteriorate. Conflict between the Tatmadaw and the Arakan Army has displaced over 80,000 people throughout Rakhine, including thousands of Rohingya in northern areas of the state.

Who are the Rohingya?

The Rohingya are a mainly Muslim ethnic minority group numbering about 1.1 million people in Myanmar. Around 90–95% of the Rohingya live in northern Rakhine.

The government of Myanmar, a predominantly Buddhist country, denies the Rohingya citizenship and excluded them from the 2014 census, refusing to recognise them as a people.

It sees them as illegal immigrants from Bangladesh.

What happened in Rakhine state?

In the early hours of 25 August 2017, violence broke out in Rakhine State, Myanmar.

The majority of people who fled travelled by foot, walking through jungle and rough terrain, or by boat, taking the perilous journey across the Bay of Bengal.

As of August 2020, approximately 600,000 Rohingya remaining in Myanmar continue to be denied freedom of movement, equal access to citizenship and essential services. According to the International Rescue Committee (IRC), even if repatriation started today, it could take as long as 13 years. 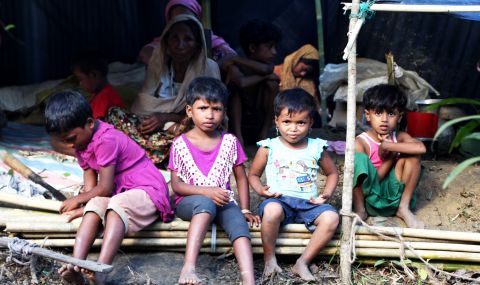 Entire families of Rohingya refugees are living under just one sheet of plastic in Balukhali camp in Coxs Bazar, Bangladesh, after fleeing from Myanmar's Rakhine state. Photo: Md. Sariful Islam/ActionAid

Who is most affected by the Rohingya refugee crisis?

ActionAid Bangladesh reports that women are heavily affected, as well as those with disabilities and the elderly. A high number of unaccompanied children also arrived in Bangladesh who either lost their parents during the displacement or were brought over by their extended family members.

ActionAid staff in Cox’s Bazar estimate that approximately 60% of refugees are single mothers.

During the monsoon and cyclone seasons, hailstorms, heavy wind and rain, and lightning put lives at risk. Without additional support, the lives of the most vulnerable Rohingya refugees are at risk. Flooding can prevent thousands of refugees from receiving aid and if toilets and wastewater overflow, the risk of waterborne diseases spreading is high.

Farah Kabir, the Country Director of ActionAid Bangladesh, said: “Rohingya women and girls continue to bear the brunt of the refugee crisis. Those we work to support are bearing the physical, and mental scars of what they’ve experienced – including shocking sexual violence, pregnancy through rape, and a painful and dangerous journey to Bangladesh."

Today, amid extreme poverty and desperation, women and girls in the camps face intimate partner violence, forced marriage, and the threat of sexual violence. Now more than ever, the international community must listen to these women, who are claiming their rights and calling for a just solution to their plight.

ActionAid appreciates the role of Government of Bangladesh in welcoming and providing safety to the Rohingya and for its commitment to not forcibly returning them to Myanmar as well as the people of Bangladesh who are hosting and supporting the refugees.

What is ActionAid doing in Bangladesh to help Rohingya refugees?

Since 2017 ActionAid has supported hundreds of thousands of Rohingya refugees in Bangladesh, to save lives, improve living conditions in the camps, and prevent and respond to violence against women and girls.

We are also working to improve the safety and overall living conditions in the refugee camps of Cox’s Bazar. Between January and March 2021 we have built and repaired thousands of metres of stairways, pathways, bridges and drainage systems.

Our support during the coronavirus pandemic

The Covid-19 pandemic has made the situation for Rohingya refugees even more critical.

As a result, ActionAid has been working tirelessly to improve access to water, sanitation and hygiene, as well as PPE and supplies like buckets and menstrual products.

Between January and March 2021, this included:

Women and especially mothers have specific needs, and this is never more evident than during a humanitarian disaster.

In humanitarian disasters across the world, women, girls and people who menstruate tell us that amongst the items that they need the most are sanitary towels, wipes and soap, so that they can manage their periods hygienically and with dignity.

We've also set up 33 women-led ‘WATCH’ committees to monitor and prevent violence against women and girls and encourage women to access one of the women’s safe spaces.

We've provided at least 7,383 families with solar powered lights. These help women and girls feel safer moving around the camp at night.

And we've supported at least 360 Rohingya women and girls with sewing training, helping them to build a livelihood for the future.

ActionAid works with women-led committees of refugees in the camps, to ensure the aid we provide is appropriate, meets the needs of women and girls and gets to the people who need it most.

These women-led committees raise awareness about health and hygiene issues, and encourage women and girls to raise concerns and report their experiences of violence. Through these leadership opportunities, ActionAid is supporting women to play an active role in community organisation and participate in decision-making processes.

A huge thank you

We'd like to say a huge thank you to everyone who makes our support for Rohingya refugees possible - including the Disasters Emergency Committee, The Alborada Trust and many individual supporters.